Welcome to the Story Walkthrough!

What does good solutions journalism look like? And how can reporters apply the solutions lens to education coverage?

In this section, we’ve asked journalists to annotate their own stories—to provide a sense for the range of approaches that are possible, and also to explain how to make those happen.

Here’s the catch: You get to join in the fun.

— Highlight the text you want to annotate

— Point out stuff that works well or could have been better

Check in every so often because we regularly change the stories here! 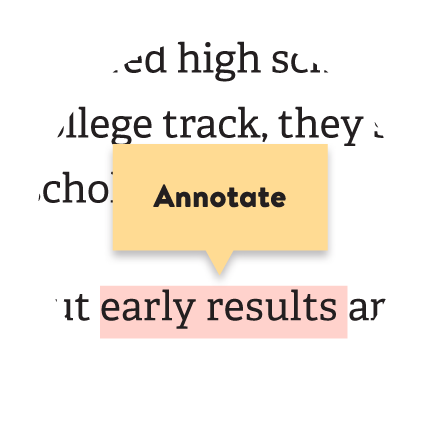 Before end-stage heart failure confined Shirley Sarah Heller to bed, her life was a swirl of non-stop activity.

The 90-year-old resident of Camarillo's Leisure Village swam 40 laps a day in an Olympic sized pool; she played golf and won trophies on the green; she performed in a tap dancing troupe called the Happy Hoofers; she took photography and music classes, and more.

"We had the group where we play kazoo," Heller says. "I figure I'd join it - if I don't like it, I'd quit. But I tried everything. You never know what you're going to like!" Heller says hers has been a vibrant life that she hopes will end with a quality death. For her that means avoiding aggressive medical interventions.

"This is my house and I'm going to go right here," she says to a visitor.

To help ensure that happens, Heller enrolled in hospice. These days, a team of health professionals comes to her home to provide her with pain relief and care for her psychological, social and spiritual needs. It's comfort care in lieu of life-sustaining - and expensive - end-of-life medical treatments that can require patients be hooked to feeding tubes and pumps in a hospital ICU.

"I don't like being in the hospital," Heller says. "They wake you up all the time; they don't let you rest; you don't feel good. It's different with hospice."

But there are times when hospice isn't able to protect patients from unwanted care. A person's end-of-life desires are most often thwarted when well-meaning loved ones see the patient in some sort of distress, says Teri Helton, program manager for Livingston Memorial Visiting Nurses Association, a nonprofit hospice program in Ventura County. And instead of calling the hospice nurse, she says, they call 911.

Mike Taigman has long wanted to change that paradigm. He's general manager of American Medical Response, which provides most of the paramedic and ambulance service in Ventura County.

Several years ago, he learned of a Texas program in which paramedics work with hospice to better honor a person's end-of-life wishes. Taigman says he shared the concept with several local hospice managers, who eagerly embraced it.

"They were just bouncing off the wall super excited about having paramedics who were trained to understand hospice and be part of the hospice partnership," he says.

That led to the creation of Ventura County's 911 hospice program, the latest in a series of state-approved pilot projects in various communities that are experimenting with expanding the role of paramedics.

Heller's hospice nurse, Kurt Rice, says it starts with the patient signing a consent form that describes what will happen if a friend, relative or caregiver calls 911.

"If the paramedics come here, instead of hauling her to the ER, they will interact with our triage people and our nurses," Rice says, "And try to take are of everything here in the home so that she could get what she wants - which is a good death."

Countywide, Taigman says, 14 paramedics received specialized training from hospice doctors, chaplains, nurses and pharmacists. "I was a little bit skeptical at first because for so many years I had been trained to treat and transport the patient," says Mike Sanders, a paramedic supervisor who received the hospice training.

But, he says, the pilot program changed his mind.

"I'm able to treat somebody and put them in a position of comfort and contact the hospice provider and talk to the nurse or if the nurse is on scene consult with the nurse and the family and make a decision from there," he says. "And nine times out of 10 we don't end up needing to transport that patient."

In lieu of transport, Sanders is able to offer the patient medications that reduce pain, calm anxiety and ease labored breathing - all of which calms family members and, in turn, makes it easier for them to uphold the patient's wishes.

So far, Taigman says, the project seems to be having the intended impact. County data he's collected show before the pilot began Aug. 1, about 80 percent of this year's 911 calls for hospice patients landed them in the hospital. Since the program started in August, only about 25 percent of the calls have resulted in a trip to the ER.

Among those who avoided transport was a new hospice patient Sanders met on a 911 call one recent morning.

"It was the family who was concerned," he says. "They hadn't seen their family member breathe the way they were breathing. And they said themselves they got scared and didn't know what to do, so they called 911.

Sanders says he was able to calm the relatives and explain to them that what was happening was expected and normal.

The idea of training paramedics in hospice has drawn some concern from the National Association for Home Care & Hospice, which represents hospice providers. It worries that expanding the role of paramedics could steer reimbursement dollars away from the hospice industry.

But those involved with Ventura County's program argue that the opposite is true: That paramedics helping to keep patients at home preserves money for hospice care, rather than having it spent on an unnecessary trip to the emergency room.

We post a new story here every couple months, so check back!